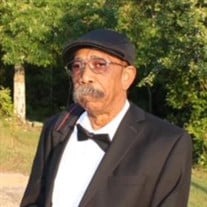 On the beautiful morning of February 2, 1946, Brother Albert Carruthers was born to the late James L. Carruthers and Jessie. Griffin in Ozark, Alabama. Following 75 vibrant years of life and 38 days shy of his 50th wedding anniversary, his spirit was released into the arms of our Heavenly Father on May 7, 2021. Growing up second to the youngest among five siblings sharpened Albert’s quick wit, entertaining humor and undeniable love for family. Although money was tight, school studies were also essential as Albert was a voracious reader, frequently reading worn-out books found in the dumpsters around his Clayton, Alabama hometown. This resourceful strategy pinned Albert at the top of his class each year, while his kindness flourished as well. For instance, when Albert was slated to graduate as high school Valedictorian in Barbour County, Alabama, he deferred the honor to his college-bound classmate. Instead, he accepted the title of Salutatorian since he did not have enough money to attend college. In 1964, Albert enlisted in the U.S. Army, was immediately deployed to Germany for roughly 3 years and returned to the U.S. to complete the remainder of his 4-year term. Soon after his scheduled discharge from the Army, Albert was introduced to Barstow, California by his older brothers, Jimmy and Morris, who had established residence in Barstow following their military careers. Before long, Route 66 and the small, kindhearted Barstow community convinced Albert to stay, enlist in the Army National Guard and earn his Associates Degree from Barstow Community College. Enter “Miss Loretta.” Albert first met Loretta Carruthers literally at the altar – he a groomsman and she the maid-of-honor in the wedding of 2 mutual friends. On June 13, 1971, they met (again) at the altar to unite in Holy Matrimony, and in due time they had 2 daughters, Adrena and Katrena. This little family unit was the apple of Albert’s eye. He forever ensured they were loved, safe, comfortable, and of course, either smiling or laughing. With a penchant for adventure, Albert’s family vacations were epic! Every other year, he planned (with lots of Loretta’s help) summertime family road trips to visit family in Alabama and Tennessee. However, Albert was notorious for jazzing up the plans, some of which included blasting through Space Mountain at Disney World in Florida, meeting ‘gators at the Panama City Snake-A-Torium then stargazing from a beachfront cottage, literal hopscotch between 4 different states at Four Corners in Arizona, somehow getting the family stuck in a rock-cave during a guided tour in Chattanooga, Tennessee, and even dumping Adrena and Katrena for a solo “rails to sails” Alaskan cruise with Loretta. And yes, there are photos! As a self-proclaimed “professional” photographer, Albert never missed an opportunity to capture memories whether it was with family, church or in the community. Very few people knew his underlying motivation – paraphrased, “It’s a blessing to capture a glimpse of happiness forever.” In fact, Albert was Katrena’s designated photographer during her 1997 reign as Miss Barstow, as well as the key photographer for Loretta’s (Miss Loretta) preschool classes for over 45 years. Amid his camerawork, Albert energetically dedicated his time to both daughters’ year-round, double packed activity schedules. He jumped right in as the primary “uber” driver for Bethel AME Church youth trips, Montara Elementary School PTA President, Barstow High School Aztec Band Booster President… that’s just to name a few! Barstow community held a special place in Albert’s heart. He enjoyed driving the elderly to their medical appointments, fixing things for those in need, and sharing heartfelt and fun stories with everyone. In his early years, he established “Carruthers & Daughters,” a one-man air condition repair service aimed to keep the community cool. In support of education, Albert served on the Barstow Community College Board. Let’s not forget, he also kept his retired boots on the ground working as a Citizen on Patrol with the Barstow Police Department. Throughout the whirlwind of life, Albert always made time for the Lord. Attending Bethel AME Church, and later Union Missionary Baptist Church, he never failed to share his signature baritone voice. One of his favorites was “Silent Night.” Did you know Albert was a trailblazer? He was the first African American firefighter and paramedic in the Barstow Fire Department’s (BFD) history. Sworn into BFD as a firefighter in 1971, Albert stayed the course despite the world’s discriminatory injustices embedded against him. Undoubtedly, he excelled as a firefighter, earning the BFD Fire Chief’s Award for Outstanding Firefighter and passing the Mobile Intensive Care Paramedic exam in 1978. Albert treasured his firefighter/paramedic career especially since it offered the ultimate opportunity to support the community. Due to health reasons, he retired from BFD in the late 1980s. Albert’s example of bravery is exponentially phenomenal. Although his health began to decline, Albert never missed an opportunity to comfort, laugh and reminisce with his wife and children, all the while lovingly spoiling his grandchildren. Albert’s zest for life, compassionate heart and inspirational energy will forever live in and brighten our hearts. Albert is survived by his beloved wife, Loretta Carruthers of Barstow, California; brothers, James (Nancy) Carruthers of Abbeville, Alabama and Alonza Carruthers of Clayton, Alabama; and was preceded in death by sister Mary Ann Jones of Eufaula, Alabama and brother Morris (Robbie) Carruthers of Opelika, Alabama. He leaves to cherish his loving memory his devoted daughters Adrena (Nicholas) Carruthers-Adams of San Diego, California and Katrena (Deon) Carruthers-Radcliff of Los Angeles, California; joyous grandchildren, Deon Radcliff, Jr. and Zoelle Radcliff; a multitude of loving nieces, nephews, godchildren, and friends across the globe; and the brave first responders of the present, past, and future.

On the beautiful morning of February 2, 1946, Brother Albert Carruthers was born to the late James L. Carruthers and Jessie. Griffin in Ozark, Alabama. Following 75 vibrant years of life and 38 days shy of his 50th wedding anniversary, his spirit... View Obituary & Service Information

The family of Albert Carruthers created this Life Tributes page to make it easy to share your memories.

Send flowers to the Carruthers family.