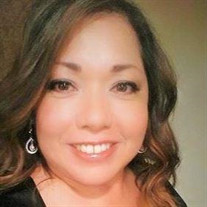 Andrea Carmen Andrade (“Tía Puchii”) Andrea Carmen Andrade, age 49, passed away peacefully on December 22, 2018, at her home in Barstow, CA, surrounded by her family, after a courageous battle with cancer. Andrea was born on October 6, 1969 in Barstow, CA to José and Carmen (Gomez) Andrade, Jr. She was a 1987 graduate of Barstow High School, and attended Questa College and San Bernardino Valley College. She married her beloved husband, David Markus, on September 17, 2016, in Las Vegas, NV. Andrea worked 27 years for Stater Bros. Markets and was adored by her co-workers and many of her longtime customers. She considered her State Bros. coworkers her extended “family.” Andrea was cherished and loved by her numerous close friends for her generous spirit, incredible sense of humor, and her ability to connect with everyone she met. Andrea lived her life to the fullest. She loved to travel nationally and abroad, and especially enjoyed the beach, her “happy place.” She found great joy spending time with her family and friends, including her beloved nephews and nieces. She was the best “Tía Puchii” in the world, never missing a play, recital, or game. Her only sister, Ana, was her best friend and soulmate. She was admired for her creativity and the ability to make lovely crafts. Everything she touched, decorated, organized, or created became beautiful with her handiwork. She was a long-time supporter and participant in the Stater Bros. Believe Walk, a charity that benefits women fighting cancer. She is survived by her husband David Markus; mother Carmen Andrade; brother José (Anne) Andrade; sister Ana (Joe) Jaramillo; nephew José (Heather) Cruz, nieces Mylena, Ella, Nora, Conley and Amani, grandnephew José and grandniece Jenna. She was preceded in death by her father, José Andrade, Jr. A Mass of Christian Burial to celebrate Andrea’s life will be held at St. Joseph’s Catholic Church on Tuesday, January 22, 2019 at 11:00 a.m. A rosary will be said prior to the Mass at 10:00 a.m. Interment will follow at the family plot at Mountain View Memorial Park, Barstow, CA. Following the interment, the family will greet friends and loved ones at St. Joseph’s Noonan Hall, at approximately 1:00 pm. In lieu of flowers, donations may be made to Stater Bros. Charities Believe Walk, in memory of Andrea.

Andrea Carmen Andrade (&#8220;Tía Puchii&#8221;) Andrea Carmen Andrade, age 49, passed away peacefully on December 22, 2018, at her home in Barstow, CA, surrounded by her family, after a courageous battle with cancer. Andrea was born on October... View Obituary & Service Information

The family of Andrea Carmen Andrade created this Life Tributes page to make it easy to share your memories.

Send flowers to the Andrade family.