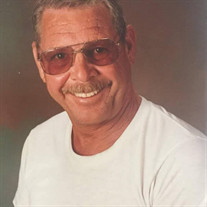 Bruce was born in Los Angeles, CA on October 26, 1938 to George and Charlotte Keeney (nee Blake). He spent his childhood years in Trona and then at the family homestead in Adelanto. Bruce graduated from Victor Valley High School in 1957. He met and married Ruby and joined the Navy. He was on the USS Morton when he received a telegram that his first born daughter had arrived at George Air Force Base. Beside the Morton, he also served on the USS Eaton and the USSLofberg. After he was honorably discharged, he eventually got a job working for the Santa Fe Railroad (Barstow) as a Fireman and moved with his wife and daughter to Helendale, CA. At this time his second daughter was born. About a year later ATSF no longer required firemen to shovel coal and he was laid off. He moved to what was called Tortilla Flats in Barstow, worked at a department store and soon after his son was born. About a year later he got a job at the Sun N Sky Golf Course doing maintenance and grounds keeping in Lenwood, CA, but with three children and a wife to care for, he was soon looking for better work and found it at Southwest Gas in Barstow. Bruce and Ruby bought their first home in Grandview and raised their children there for many years. Bruce was well known as a Meter Reader, walking the entire Barstow and surrounding communities for 27 years. He could read a meter with extraordinary accuracy from a distance of many yards. One year, he took notice of a very young boy on his route that was deaf. He realized he couldn't communicate with him, so he took a sign language class. Southwest Gas took notice and had their Magazine do a story about the relationship the two had formed. An avid reader, a writer and poet at heart, this gave him the opportunity to begin contributing his own musings, articles, and poems to the Magazine for which he won several regional awards. Eventually they divorced and he bought a home on Muriel Drive. After he retired from Southwest Gas, Bruce kept himself very busy. He was always busy restoring old cars, or working at Goldstone TV repairing old radios and televisions. He took an interest in and learned to restore jukeboxes. He served on the Barstow Police Department R.S.V.P program. He joined the Eagles Club and commissioned the painting of the mural inside the building (which is still there). He also designed the Barstow Eagles first license plate. He sponsored a section of the freeway to clean regularly under the name of G.R.A.F.T. (Getting Rich and Famous Today). One year he decided to build his own costume to participate in the annual October Mardi Gras parade for which he won first place. He sponsored a Girls/ladies Softball team for many years and collected aluminum cans all along his route to assist in purchasing uniforms for his "gals." He took up square dancing, clogging, embroidery, photography, and wood carving. He was a lifetime member and frequent visitor of the Mojave River Valley Museum. He joined the Senior Center and enjoyed the many outings and meals that they sponsored. He bought a white electric car and drove it all over Barstow (you may have seen him driving it very slowly on the side of the road). He was a true desert rat, hiking and exploring the desert he loved. He loved and adored his dogs, outliving several over the years, and loved taking them on daily walks in and around Barstow and the surrounding desert. Bruce also volunteered to teach English as a second language. From this endeavor developed a special relationship with Fengqin "Selena" Wang and her daughter Jiazi "Kitty" Guo, who became as a beloved second family to him. After Bruce developed Alzheimer’s it was necessary for him to be relocated to Reno to be near his daughter. But his love for Barstow and the High Desert was always in his heart up to the very end. A special thanks to Union Bank (Angel), The Senior Center (Joyce), The Eagles Club, Jenny's Grill, Stewart Tax Service, Carrie Fleming, Anna Sanchez, Kim Phillips, and Selena Wang for being our eyes and ears when we could not be there before his move to Reno. Also, thank you to Corinthian Place and Advanced Home Health and Hospice of Reno for their excellent care. Bruce is survived by his daughter Carrie Montoya of Albuquerque, NM, daughter Lori Walker (Russ) of Reno, NV, son Mark Keeney (Luz) of San Diego, CA; his brothers Scott Keeney of Fontana, CA, and Raymond Keeney (Angie) of Rancho Cucamonga, CA; his close cousins Millie Ashpaugh (Rob), Lorraine Fritch, Paula Blake, and numerous other cousins as well. Additionally, he is survived by 6 grandchildren, 3 great-grandchildren, and several nieces and nephews. Interment will be at Mt View Memorial in Barstow. A group Facebook page, “Remembering Bruce Keeney”, has been created, please feel free to join. In Bruce's lifetime there were and are many people who could tell you that he was quite the hellion, but his heart spoke otherwise. He provided various favors, aid, kindnesses and assistance in multiple forms to many the citizen of Barstow. It would be the fervent wish of the family that you pay it forward and help someone else in need, without judgment. "For when you have done it unto the least of these my brothers, you have done it unto me." Matthew 25:40.

Bruce was born in Los Angeles, CA on October 26, 1938 to George and Charlotte Keeney (nee Blake). He spent his childhood years in Trona and then at the family homestead in Adelanto. Bruce graduated from Victor Valley High School in 1957. He... View Obituary & Service Information

The family of Bruce Keeney created this Life Tributes page to make it easy to share your memories.

Send flowers to the Keeney family.