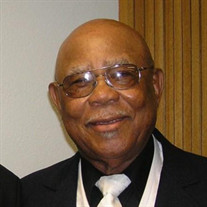 Capers Hamilton was born on May 15, 1929 to Maggie Hamilton and Russell Reeves in Ringo, Louisiana and was later raised in Shreveport, Louisiana. Capers is the oldest of 9 brothers and sisters. As the loving and caring oldest sibling, Capers joined the US Army at age 16 to help support his mother and siblings. Capers met Doris Brutus as a young teenager and the two became best friends. During those early years between middle school and high school, the two grew up together and kindled a life-long connection. On September 12th, 1948 Capers and Doris where united in holy matrimony while Capers was on leave from the US Army. From this union the couple had three children. First son Lyndell was born in 1949, daughter Evelyn in 1951, and second son Donald in 1952. In 1954, Capers and Doris moved to Barstow, California to raise their children and to build a better life for themselves. In Bartow, Capers was known to several in the community as “HAM”. This was in part from his Army days where people referred to soldiers by their last name. However, it was also due to the fact that Capers was a “Big HAM” and took on the role of family photographer and amateur photo historian for his family and friends. Mr. Hamilton’s personal collection of family photos spans more than 7 decades with over 5500 individual old- fashioned printed photos, all of which have been digitally archived for his children, grandchildren, great-grandchildren and great-great grandchildren. As an active part of his community, Mr. Hamilton worked at the Marine Corps Logistics Base, Nebo for over 30 years and retired in 1984. After retirement, he later worked an additional 10 years for DynCorp at Fort Irwin, CA. Mr. Hamilton’s hobbies included bowling, fishing, recreational walking and bar-b- queuing. Bar-b-queing was Mr. Hamilton’s favorite past-time and he would regularly treat the whole family to a homemade “Steak Dinner”. As a pillar in the community, Mr. Hamilton volunteered his time visiting the local VA Home and also served as an NAACP board member for several years. He enjoyed raising money for local causes and also assisted with Pancake Breakfast fundraisers at local churches as often as possible. Mr. Hamilton and family were long term members and attended East Barstow Baptist Church under Reverend Hailey for many years. In his later years, Mr. Hamilton acted as the primary caregiver to his wife Doris and the two enjoyed watching Joel Osteen on TV every Sunday. Throughout their lives, Mr. and Mrs. Hamilton enjoyed family trips to Las Vegas, Shreveport, New Orleans, Atlanta and various places in California, Florida, Texas, and Kansas to visit loved ones.  Mr. Capers Hamilton entered into rest on February 8, 2021. He is preceded by his loving wife of 73 years Doris, daughter Evelyn Scott, daughter-in-law Iona Hamilton, and grandson Adam Scott. He leaves to cherish him: Sisters Esther Ruth Truley, Verna Mae Jackson, and Jean County, Sons Lyndell Hamilton, Donald Hamilton, daughter-in- law Ann Hamilton, grandchildren, Jacqueline Hobson, Stephanie Combs and Husband Noel Combs, Chanda Hobson- Cum and Husband George Steven Cum, Niteasa Hamilton, Cedric Hamilton, Donte Hamilton, Kristi Hamilton, Andre Hamilton, Amber Hamilton, Great Grandchildren, Great-Great Grandchildren and a host of loving family and friends.

Capers Hamilton was born on May 15, 1929 to Maggie Hamilton and Russell Reeves in Ringo, Louisiana and was later raised in Shreveport, Louisiana. Capers is the oldest of 9 brothers and sisters. As the loving and caring oldest sibling, Capers... View Obituary & Service Information

The family of Capers Hamilton created this Life Tributes page to make it easy to share your memories.

Send flowers to the Hamilton family.