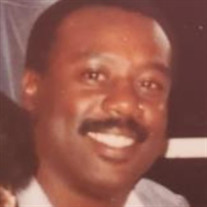 Charles W. Hamilton was born November 18 1952 in Louisiana, to the late Maggie Hamilton and Marshall Moore. He was brought to Barstow California as a small child. He departed this life on August 18, 2020. Charles walk with God was foremost in his daily life. He rose at 2 am every morning to read and study the Bible. Following with his mediation and prayer for all his loved ones and the state of the world. Charles was a member of African Methodist Episcopal Church (AME). Attending in Barstow (Bethel); Victorville (Greater Harvest) and San Bernardino (St Paul’s) according to where he lived. A few years ago Charles was invited to a men’s bible study, hosted by New Life Chapel Men’s Fellowship in Hesperia CA. This bible study being open to all Christian men brought him great joy and deepening his understanding and knowledge of the Bible. Here he would meet and make new lasting friendships and renew some Barstow one. Recently Charles had found that even in light of the pandemic, the Bible study was to continue outside in the park. He was able to attend prior to his surgery and that brought him great joy and peace. Charles had the biggest heart with room for an awesome amount of people. His ability to put his heart into all relationships will leave a deep void. He attended local schools graduating from Kennedy High School in 1971. While in high school he enjoyed playing on all levels of sports teams baseball, basketball and football, as well as a participating in band and choir. Upon graduating high school he attended Barstow College, where he continued with the three sports enjoying BCC’s strong presence and winning abilities in the conferences. Charles would later return to night school to complete his education graduating from Barstow College in 1994 earning an Associate’s Degree, while he was working full time at Fort Irwin CA and coaching a minor little league baseball team. Charles continued his enjoyment of sports playing in the park and recreation’s league seasons of softball and basketball. Charles briefly played on a local semi-pro football team. Upon moving to Victorville, he would begin playing in the Senior Softball USA league playing more than 10 years. Here as was his nature he formed new and lasting friendships. Traveling to various cities and state for tournaments, along with his wife became an opportunity for them to visit and explore the areas. Charles met Kimberli Stowers 41 years ago and formed a wonderful friendship. They married and celebrated their 38 year anniversary this past summer. To this union they welcomed two children. Charles had a strong passion and fierce protective nature for his family and friends. Charles always tried to make time for the grand kids games and activities. He enjoyed being an umpire and referee of youth baseball and basketball. Charles was preceded in death by his mother Maggie Hamilton, father Marshall Moore and step-father Montique Mitchell. Brothers: Louis (aka BD); Lethon; Hershel; Roger; and Virgil Hamilton and Clyde Moore. Sisters Evelina Jones and Eddie Jean Norris (aka Sue). He leaves to cherish his memory wife Kimberli, son Charles Hamilton II; daughters Sequela Carpenter husband Bushawn and Devon Aleshia Hamilton Bell husband Wayne. Grandson DeAndre Hamilton, Granddaughters Ciara Leja’ and Teah Gonsalves husband Jeffrey. Great grandsons Jamari Zakie Smith; DeAndre M. Hamilton Jr. and Great Granddaughters Ny’Amoni Hamilton; Adria Burke; Amaia Estores and Ayla Gonsalves. Along with his brother Capers Hamilton and sisters Esther Ruth Truly and Verna Mae Jackson. A large host of nieces, nephew, cousins and friends. Charles will be interred at Mountain View Memorial Park in Barstow, CA following his home going services at Sunset Hills in Apple Valley, CA Jesus said… “I am the resurrection and the life. Those who believe in Me, even though they die, will live, and everyone who lives and believes in Me will never die.” JOHN 11:25, 26 PALLBEARERS: Danny Norman Ed Jones Leslie Yarber Ken (KT) Thomas Keenan Gardner Glaude Grady HONORARY PALLBEARERS: Mike Stowers Bennie Stowers Larrie Stowers Jimmy Gardner Ken Thomas Ken Hardiman Ron Gray

Charles W. Hamilton was born November 18 1952 in Louisiana, to the late Maggie Hamilton and Marshall Moore. He was brought to Barstow California as a small child. He departed this life on August 18, 2020. Charles walk with God was foremost... View Obituary & Service Information

The family of Charles Wendell Hamilton created this Life Tributes page to make it easy to share your memories.

Send flowers to the Hamilton family.