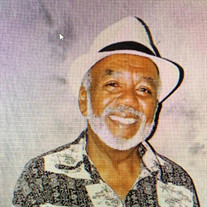 Edward (Eddie) Clarence Dawson Jr, 83 of Barstow, California, passed away on December 17, 2020. Eddie was born on February 6, 1937 in Philadelphia, PA., he was the only child to Edward C. Dawson Sr. and Mildred Dawson. When Eddie moved to Barstow, he met the love of his life, Barbara Ann Hawkins, and the two were married on July 31, 1999. Eddie and Barbara united with Bethany Christian Fellowship under the leadership of Pastor Kenneth Shaw. Eddie was a sous chef for the Reggie’s Club at the NTC (Fort Irwin) and was employed for over ten years as custodian for Silver Valley Unified School District. He was known for his adventurous spirit and his unshakable enthusiasm, hence his beloved nickname: “Fast Eddie” Eddie was preceded in death by his parents. He is remembered with love by his wife of twenty one year’s Barbara Ann Dawson; one son Edward Dawson; four stepsons Lawrence (BaBa) Hawkins, Edwin (Wayne) Hawkins, Bobby Joe Hawkins, and Donald Ray Hawkins; three stepdaughters Lydia Shaw, Sharon Daffin, and Cecilia Hawkins; two brother in-laws Ray Moore, Johnny Mack Moore; two sister in-laws Evelyn Flowers, Ethel Faye Moore; two son in-laws; Kenneth R. Shaw and Earl Daffin; two daughter in-laws Venita Hawkins and Cynthia Hawkins; and a host of grandchildren, great grandchildren, great-great grandchildren, nieces, nephews and friends. Eddie was a classic man with a timeless quality that showed an outstanding example of his style and finesse with people. A reliable man was he. His life was a blessing, his memory a treasure, he is loved beyond words, and missed beyond measure. All others can tune in on Facebook at Bethany Christian Fellowship Barstow click on https://www.facebook.com/Bethany-Christian-Fellowship-145953615566198 Kenneth Shaw https://www.facebook.com/kenneth.shaw.77/ Join: Zoom Meeting 352 786 0496 Masks required and Social Distancing Measures will be enforced. There will be no repass and no meeting at the resident after the service. Pastor Harvey mike Smith, Pastor Kenneth R Shaw and Pastor Bushawn Carpenter will be officiating.

Edward (Eddie) Clarence Dawson Jr, 83 of Barstow, California, passed away on December 17, 2020. Eddie was born on February 6, 1937 in Philadelphia, PA., he was the only child to Edward C. Dawson Sr. and Mildred Dawson. When Eddie moved to Barstow,... View Obituary & Service Information

The family of Edward C. Dawson created this Life Tributes page to make it easy to share your memories.

Send flowers to the Dawson family.