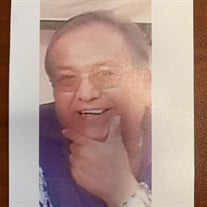 Irwin S Pellman 71, of Barstow passed away December 13, 2020 in Barstow, Ca. He was the oldest of three children. He was born May, 26th 1949 and spent a majority of his life in Barstow. His first home was a converted boxcar in the Barstow/Santa Fe Indian camp where the Railroad had built facilities for their Indian employees’ who had relocated from their reservation. Irwin, his sister Lois, and younger brother Rick have fond memories of their time there. There were lots of kids to play with and a strong sense of community and culture as everyone looked out for each other. Irwin was an adventurous boy, loving sports and the outdoors. As a young adult he would spend summers at the Laguna Reservation in the village of Paguate assisting in the community gardens growing corn, squash and melons. He also would help in the sheep camps, herding sheep from one grazing area to another under the watchful eye of a Sheppard. It was there that he leaned to ride a horse and drive a horse drawn wagon as that was the way most people got on the Rez. Irwin went to grammar school in Barstow and during the early 60’s attended St. Catherin’s Indian School near Santa Fe New Mexico. His sister Lois also attended during that time. It was at boarding school that they learned many lessons, both academic and about life. There shared experience in this environment formed a strong bond that would last the rest of his life. At St. Catherine’s he participated in basketball and band, and was an Alter Boy. He left St. Catherine’s because he wanted to play football which was not offered there. He moved back to Barstow and attended Kennedy High School where he played sports and made the Varsity Football Team. At Kennedy he also excelled in mechanical drawing. He was very artistic and had a beautiful hand at calligraphy. His letters and even the envelopes were often addressed in this artistic form of writing. He graduated with honors in 1967. 1967 was the height of the Vietnam War. Irwin followed in the footsteps of his father (who served in the Army Air Corp during WWII) by joining the Air Force. Trained as a jet mechanic but being strong and athletic, the he was offered a chance to be a helicopter rescue crewman. He jumped at the chance and spent the majority of his time in Vietnam being lowered from a helicopter into the jungle to find and rescue downed pilots. It was dangerous work but Irwin was good at it and saved many lives. After leaving the Air Force Irwin moved back to Barstow. He secured a job with the Santa Fe Railroad. Initially hired as a mechanic he soon was promoted to accident investigation. His specialty was accident reconstruction and Train Recorder (Black Box) interpretation. Throughout his life Irwin loved to go hunting. Whether it was at the Mescalero Apache Reservation where he had relatives or Northern California, Nevada or Utah where he hunted with his close friends. Irwin had a strong sense of culture and community. He served three years as Lieutenant Governor of the Laguna Barstow Colony. He was a longtime member of the Barstow Moose Lodge they participated in local charity events. Irwin was proud of his military service. He was an active member of the American Legion and Eagles. When his father died Irwin became head of the family. He was always someone you could count on. In 2011 when his sister and her husband needed assistance moving from Gallup New Mexico back to Northern California Irwin came at short notice. He organized the entire move which would not have been possible without his help. One of the last things he did before getting sick was to bring supplies to his mother. He was always there for her. He will be very missed. He was preceded in death by his father Leroy Pellman and son John Hugill. He was survived by his wife of 26 years Diana Pellman of Barstow, his mother Florence Pellman of Barstow, Children Wendy Pellman, Jason Pellman, Laura Ybarra, Joyce Wilston and Michelle Smith. He’s also survived by his Sister and brother-in-law Lois & Pete Cunha of Citrus Hills, Brother and sister-in-law Rick & Julie Pellman of Barstow and Nephew Kevin Cunha. He also left behind 16 Grandchildren and 16 Great Grandchildren. Due to current circumstances, we are postponing memorial services and will contact friends and family when we’re able to proceed.

Irwin S Pellman 71, of Barstow passed away December 13, 2020 in Barstow, Ca. He was the oldest of three children. He was born May, 26th 1949 and spent a majority of his life in Barstow. His first home was a converted boxcar in the Barstow/Santa... View Obituary & Service Information

The family of Irwin Pellman created this Life Tributes page to make it easy to share your memories.

Send flowers to the Pellman family.