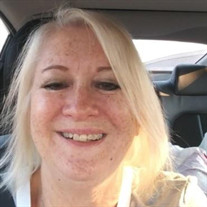 Laurie Joanne Romano of Las Vegas, NV passed away suddenly on April 17, 2021. She was born in August 1953 to James and June (Bilyeu) Klasmier in Syracuse, New York. Laurie loved being a grandma and treasured each of her 11 grandchildren and great-grandchild. She was proud of each and every one of them and enjoyed traveling all over the country to visit them. Laurie was well known as a fantastic cook and baker, supplying friends and neighbors with delicious treats. She worked as a claim supervisor for several insurance companies, retiring five years ago. Laurie never met a stranger – only people that were not yet her friend. She made friends for life, quickly and easily. She was also the most organized person in the universe, making Marie Kondo and Martha Stewart look like rank amateurs. Her home was always spotless, but welcoming, and she enjoyed hosting friends and family. Laurie enjoyed all sorts of crafting. Every grandchild had a knitted blanket made especially for them! She spent girls-get-away weekends scrapbooking with good friends. She made jewelry, sewed, ran her own Etsy shop, the list goes on…. Laurie met Tony Romano, the love of her life, and they enjoyed 34 wonderful years together. Tony and Laurie did everything together, truly enjoying being in each other’s space. She was predeceased by her parents, and her sister, Judy Klasmier. Surviving to cherish her memory are her husband, Anthony, of Las Vegas, daughters, Jennifer Russell of Patterson, CA, Kelly Easterly (Eric) of Summerville, SC, Kristin Wyatt (Ben) of San Jose, CA, and Laurin Ogden (Jon) of Baldwinsville, NY. Her eleven surviving grandchildren include Jasmine Dawkins (William) of Elgin AFB, FL, Christopher Villalobos of Newark, CA, Nathan Houps, Ryan, Damien, and Even Easterly of Summerville, SC, Roman Koopen of San Jose, CA, Gianna, Jon, Landon, and Lawson Ogden of Baldwinsville, NY, and great-granddaughter Isabella Dawkins of Elgin AFB. Las Vegas services will be held at a later date at the convenience of the family, and a celebration of her life will be held in NY during the summer months. In lieu of flowers, the family requests that donations in Laurie’s memory be made to the American Diabetes Association or the animal charity of one’s choice.

Laurie Joanne Romano of Las Vegas, NV passed away suddenly on April 17, 2021. She was born in August 1953 to James and June (Bilyeu) Klasmier in Syracuse, New York. Laurie loved being a grandma and treasured each of her 11 grandchildren and... View Obituary & Service Information

The family of Laurie Joanne Romano created this Life Tributes page to make it easy to share your memories.

Send flowers to the Romano family.