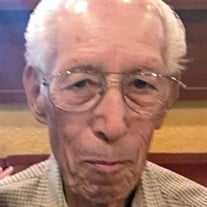 Leo E. Cordova, 89, returned to his heavenly home on October 31, 2018. His devotion to his family and his belief in God supported him in his struggle and ultimately gave him peace. Leo was born to the late Jose and Serferina Cordova, a retired Santa Fe Railway employee and a homemaker respectively, in La Jolla NM on February 23, 1929. He was a devout Catholic. He attended Sunday mass and Holy days. He was an usher for Saint Joseph's Catholic Church. He retired from Barstow Santa Fe Railway in 1991 after 45 years of service. Leo Married Candelaria Melendez, on May 25, 1954 in Barstow, CA. Leo Had five children whom he shared his thoughts on the importance on patience, discipline, and humility, he also taught them to read, write, and solve complex equations. Leo was an educator of the heart. He was kind and soft-spoken, and always had time to answer a question or solve a problem, no matter how trivial. Leo will be remembered for is wit, generosity, love of sports and reading western stories. He is dearly missed by his loved ones who celebrate a Thomas Campbell quote: " To live in hearts we leave behind is not to die. " which will remind them of him. Leo is survived by his wife of 65 years, Candelaria (Lala); children : Irene Meunier, Cecilia, Phillip, Ann Margaret ( Mike Barrett), and Patrick (Sharlotte); his grandchildren: Edward Meunier, Kellie Segarra (Jesse), Ryan Cordova, and Jennifer Cordova ; his great grandchildren: Eddie Meunier III, Audrina Meunier, Dominick Segarra, and Marcus Segarra; his sisters: Gloria Archuleta and Donna Cordova and sisters-in-laws: Rebecca Cordova and Annie Cordova. He is preceded in the death by his parents and his brothers: Pablo, Anselmo, and Eluvilo. All services will be held at Saint Joseph's Catholic Church, 505 E. Mountain View, Barstow, CA, Thursday, November 8, 2018 beginning with Viewing at 9:00 a.m. Rosary at 10:00 a.m. A Funeral mass will be celebrated at 11:00 a.m. Interment will follow at Mt. View Cemetery , Fort Irwin Road. Pall bearers will be Patrick, Ryan, and Jennifer Cordova, Edward Meunier, Tony Cordova, John Cordova, Michael Archuleta, and Mike Barrett. A reception follows at the Saint Joseph's Noonan Hall . To send flowers send them to the Church address.

Leo E. Cordova, 89, returned to his heavenly home on October 31, 2018. His devotion to his family and his belief in God supported him in his struggle and ultimately gave him peace. Leo was born to the late Jose and Serferina Cordova, a retired... View Obituary & Service Information

The family of Leo E. Cordova created this Life Tributes page to make it easy to share your memories.

Leo E. Cordova, 89, returned to his heavenly home on October...

Send flowers to the Cordova family.