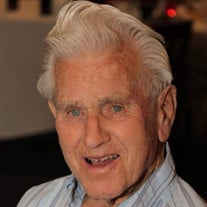 Marshall A. Franey, 92, a resident of Barstow for 62 years, passed away Monday, April 15, 2019 at home. Marshall had been battling heart disease and cancer in his last few years, succumbing to these illnesses. Marshall was born in Boston, Massachusetts on November 22, 1927. After leaving high school Marshall joined his brothers in the military and was in the US Army assigned to the Pacific Theater during WWII. While living in Massachusetts, he met and married his wife Jacqueline Paquin where they both worked in the jewelry manufacturing business. Marshall owned the Jenney Service Station in North Attleboro, and was partners with his brother Neil in the Plainville Hardware Store, Plainville, Massachusetts, before moving to Calif. in 1955. They lived in Ontario and Mojave before settling in Barstow in 1958. He was employed with the O’Donnell Funeral Home and Ambulance Co as General Manager from 1957 to 1973. In 1969 he became a contract deputy the San Bernardino County Coroner’s Office until 1973 at which time he became a full-time resident deputy coroner for the entire high desert. In 1985 the coroner’s office opened a high desert substation where Marshall was the supervising deputy until his retirement in 1997. Marshall and his wife Jacqueline raised three children and spent their retirement years in Barstow. Marshall was preceded in death by: his wife Jacqueline, youngest son Scott, daughter in-law Loretta, son in-law Edwin Parker, grandson in-law Daniel Sanchez along with his parents Cornelius & Ruth, brothers Myles “Bud”, Cornelius “Neil”, sisters Marie Allard and Ruth Whittier Surviving family includes his son Mark (Cindy); daughter Valerie; grandsons Michael (Candi), Andrew (Sarah), Nicholas, Marshall and Logan; granddaughters Ashley, Courtney, Britney, Bailey and Joy; along with great- grandchildren Stella, Cash, Dani and Ryan. Funeral Services will be held at The Harvey House Grand Ballroom in Barstow (685 N. 1 st Ave.) on Friday October 15, 2021, at 11:00am, followed by a Graveside Service at Mountain View Memorial Park in Barstow.

Marshall A. Franey, 92, a resident of Barstow for 62 years, passed away Monday, April 15, 2019 at home. Marshall had been battling heart disease and cancer in his last few years, succumbing to these illnesses. Marshall was born in Boston, Massachusetts... View Obituary & Service Information

The family of Marshall A Franey created this Life Tributes page to make it easy to share your memories.

Send flowers to the Franey family.