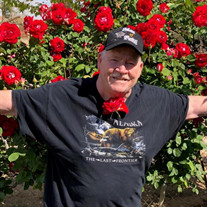 Terry Lee Gustafson lost his battle with Covid 19 on December 28, 2020. He will be greatly missed, and the world is a little less bright without his Soul lighting our paths. Terry Gustafson was born on 11/25/1943 in Blue Island Illinois. His parents were Albert Gustafson and Agnes Marlow Gustafson. They moved to Barstow in the 1950’s where they lived in Hinkley during Terrys Childhood. He met the love of his life Sandy Fairbanks at Barstow High School and they were married on January 25, 1963. Terry and Sandy bought their first home in Lenwood, California where they raised their 3 daughters Deborah, Laurie, and Kristie. Terry worked as a Machinist for Santa Fe at the Barstow Facility and was later transferred to Kansas City, where his 4th daughter Rhonda was born. Terry was later transferred back to California where he retired as Chief Industrial Engineer in 1984. Terry was proceeded in death by his parents Albert and Agnes Gustafson, is Wife Sandy Gustafson in 2000, and His brother Wayne Gustafson. He is survived by his sister Sandra Depue, his Daughters: Deborah Trowbridge, Laurie Gustafson Heald, Kristie Gustafson Snyder, and Rhonda Gustafson. Terry was known as Papa and is survived by 13 Grandchildren: Nicole Gustafson Rodriguez, Stephen Bechter, Deanna Gray, Destiny Elmer Sorenson, Benjamin Bechter, Bradly Gustafson Byer, Sara Trowbridge, Dakota Trowbridge, Kyle Gustafson, EmaLee Gustafson, Tim Heald, Justin Heald, and Brandon Heald. He is also survived by 16 Great Grand Children: Nadia, Chase, DJ, Destiny, Max, TJ, Tyler, Cooper, Ryder, Caiden, Ethan, Samantha, David, Adaleigh Grace, Elijah, and little baby Bechter is due in April. Terry had many hobbies that he enjoyed throughout the years. He was on a bowling league for most of his life. He enjoyed coin collecting and date nail hunting with his Father. Later, in his life he enjoyed golfing until his knees went bad. Terry also enjoyed Basketball and Football, he loved his Lakers and his Chiefs. Terry enjoyed working in his yard, and he grew the most amazing roses. Terry’s greatest passion was his Love of our Lord Jesus Christ and for his family. Terry was a genuine Christian and a truly gentle human being. He prayed for his family, friends, and humanity. He believed in giving back to the Lord, because of the Blessings he received. He donated with love and grace. Terry will be greatly missed by all who knew him. The world was a better place with him, and we are all better humans for knowing and loving him.

Terry Lee Gustafson lost his battle with Covid 19 on December 28, 2020. He will be greatly missed, and the world is a little less bright without his Soul lighting our paths. Terry Gustafson was born on 11/25/1943 in Blue Island Illinois. His... View Obituary & Service Information

The family of Terry Lee Gustafson created this Life Tributes page to make it easy to share your memories.

Terry Lee Gustafson lost his battle with Covid 19 on December...

Send flowers to the Gustafson family.